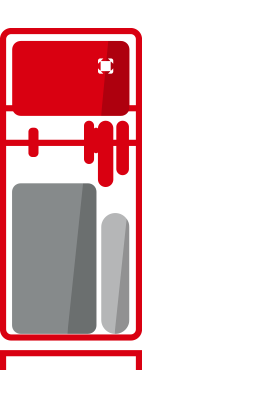 With the SOTEX Nitromat nitrogen generators you can make your own nitrogen! No more fussing with nitrogen bottles or expensive subscriptions and the tricky filling of liquid nitrogen tanks. The applications are particularly diverse.

SOTEX delivers all possible capacities, from 0.9 Nm3/h, purity from 95% to 99.99%. When constructing the system components, we select highly reliable products from renowned A-brands. This makes our nitrogen generators extremely reliable and can be used worldwide.

The SOTEX Nitromat Basic nitrogen system generates pure nitrogen from compressed air and stores it in a high-pressure nitrogen vessel. This ensures that you always have sufficient nitrogen for your application. The capacity and purity are determined at your request in the quotation stage.

The Siemens control of the SOTEX Nitromat Basic seamlessly controls the process in the generator and provides you with the desired information such as the pressure in the storage tank and, if required, the purity percentage. Of course we can offer the desired information for application on your system, such as communication modules such as Modbus, Profinet and Profibus. Connection to an extranet and internet are of course also possible.

With a SOTEX nitrogen expansion system, you are always assured of pure nitrogen to protect your vertical heat/cold storage tank.

An intelligent and user-friendly Siemens control system regulates the pressure management of the nitrogen cushion in the heat storage tank and monitors the water content. This way you can rely on an optimal security and protection of the tank and heating system.SOTEX nitrogen expansion systems successfully protect valuable heat storage tanks all over the world. There are also SOTEX nitrogen expansion systems for use on horizontal heat storage tanks using special buffer vessels for the expansion collection and of course the SOTEX nitrogen systems are being used very successfully in more and more geothermal projects. Optionally, communication modules such as Modbus, Profinet and Profibus and/or an extranet and internet are possible.

The nitrogen is used in this area to replace or expel the air, which considerably reduces the risk of decay. The lower the concentration of oxygen, the smaller the risk of oxidation. In fruit juices vitamins are better preserved, in wine production nitrogen is used in storage, production and also in the bottling plant. This means the wine needs fewer additives, which preserves the colour, aroma, acidity and final taste very well.

Oxidation also has to be avoided here. The nitrogen expels the oxygen-rich air during the lead-free soldering of printed circuit boards and other electronic components.

Nitrogen is used as ‘blanketing’. A nitrogen blanket in storage tanks. Nitrogen is also used to purge pipework, reactors and compressor systems. This reduces the risks of fire and/or explosions.

The production of fruit is heavily dependent on the seasons. Yet there are ways of extending the shelf-life of fresh fruit for months using smart storage systems. In addition to cooling these storage areas, the oxygen level is also dramatically reduced by nitrogen generators.

Nitrogen is used in many analytical methods. Highly pure nitrogen is also used as a carrier gas in various instruments.

In the shipping industry, nitrogen is used in the kinds of applications mentioned above. These include the protected transportation of foodstuffs and/or the reduction of fire and explosion risks.

A fire requires flammable material as well as an ignition source and, of course, oxygen. If the oxygen percentage is adjusted (lowered), it is no longer possible for a fire to break out.

In these industries, nitrogen is mostly deployed as ’blanketing’. It is used to insulate large hot-water storage tanks. In other words, hot water is covered with a layer of nitrogen which is blown into the storage tanks and kept at pressure. The blanket above the water constitutes a residual percentage of 1% and prevents oxygen from penetrating the water. In addition, it prevents corrosion of the steel wall of the tanks. SOTEX primarily supplies its systems to this market. A smart control unit is added to the system, which governs expansion.

These days, heat-storage tanks are usually upright. The horticultural industry requires hot water during the day. This entails release of CO2 which is used in the glasshouses to force or stimulate the growth of the crop in question. Excess heat produced during the day can be stored in the upright storage tanks.
During the night, this heat can be used by retrieving it from the heating system. This reduces the need to heat the glasshouse as hot overnight. In this system, the water in the storage tanks expands and contracts, creating changes in pressure. The SOTEX system monitors this process, continuously protecting the tanks against over or under pressure situations.